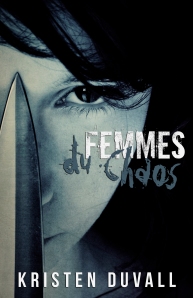 Today I’m interviewing Kristen Duvall, a writer I’ve been following for the past few years, about writing and some of her recent releases. She’s also running a giveaway to coincide with the release of Femmes du Chaos (pictured, right), which includes that and other books (like my novel, Adrift), and an Amazon voucher as the possible prizes. You can find the giveaway at the end of this post.

I originally encountered you through the LJ Idol competition, which is how I came to enjoy your perspective on the world, and your writing. How would you say the competition helped you as a writer?

Before joining the competition, I wasn’t writing nearly enough. I wrote now and then, but it the competition helped get me writing on a regular basis. The prompts helped generate ideas I might not have had otherwise, and my creativity has grown in leaps and bounds since my first season playing the game. Not to mention, I met so many other writers who offered advice, feedback and more… all of this helped me grow as a writer, and the connections I’ve made from the group still help me to this day. I have beta readers, editors, and followers I wouldn’t have had otherwise. Not to mention, I met some great friends that have provided me with emotional support through the years as well.

I understand that a number of the stories in Femmes du Chaos were originally written for LJ Idol. What can you tell me about the process, about how you started there and then developed the stories into a book?

I loved many of the stories I wrote for Idol, but knew that most would need to be rewritten and expanded. Still, I wanted people to read my work. I considered submitting them to anthologies and whatnot, but when it came down it… I wanted to keep control over them. I knew that many of them were good stories, stories people would enjoy. So I sat down an started looking at them one-by-one. I chose my favorites, or ones that I knew had potential with some revisions. I would look at each one and read through the comments people had given to me about them. I picked them apart, and in many cases, I totally re-did the entire story. Many have different endings than they had before, some have new details to flesh them out, and others took on a new life. It was a fun process and I hope people enjoy these stories as much as I enjoyed writing them.

Do you have a personal favourite story in the collection? If so, which one, and what can you tell us about it without giving spoilers?

This is hard because I already picked my favorites from all the stories that qualified. But I am really drawn to Bonnie and Clyde. I can’t explain why without giving away the ending, but those who know me will know exactly why when they read it. Oh and originally, Sylvia was going to be a male bounty hunter (because traditionally, she would have been a male), but it didn’t work for me. So I made her a female… and for that reason, I love the story. She’s a girl in a traditionally male story.

I love Meredith Gentry in the Meredith Gentry series by Laurell K. Hamilton. Her character in the early books (before it got overly porn-like) was a strong woman who often saved the men. I love how it’s the reverse of what we typically see. Same goes with Anita in her Anita Blake series… I love that they don’t expect the man to swoop in and save the day. They save themselves and often, they save their men. I love seeing the fairy tale trope reversed.

I also love seeing female villains who are just as ruthless as their male counterparts. For that reason, I love Baby from the House of 1000 Corpses/The Devil’s Rejects. She’s heartless, cruel and violent, and yet… I like her for it.

In TV shows, the one character that comes to mind right away is Sarah Connor in the Terminator tv series that was short lived. I loved Lene Headey in that role. She honestly made me want to kick ass. She was a very good character, and before that I had never watched The Terminator franchise. She made me want to. In Game of Thrones, I’m one of many who is in love with Daenerys, but that girl kicks butt. Not only is she strong, she’s compassionate at the same time. It just shows that women can be both ruthless and strong while also having a heart. Her character is one of my favorite females in modern literature. I also like a few other women from the show/books, Arya being another strong one that comes to mind.

You also recently put out Horrors of History—a horror anthology—through Fey Publishing. What can you tell us about that book? How did you select the stories that feature in it?

Horrors of History is a book which combines horror with historical fiction. I’ve always been fascinated with history, specifically the darker side of it. I’ve often thought alternative history is very interesting and wanted to read more of, which is why I chose that theme for the anthology. As far as selecting submissions, I read each one several times over. I looked for themes that I felt would have a wide appeal while also being stories I liked. I picked the pieces I loved, plain and simple. The only regret I have is that I wasn’t fast enough on one of my favorites and they got accepted elsewhere. If I found myself wanting to talk to my boyfriend about the piece, reading bits off to him going “this is awesome!”, chances are it made it into the book. I ended up turning down more than I accepted, I can be very picky as a reader.

How was putting Horrors of History together different from working on your own collection of stories?

There was less editing with Horrors of History because I promised to let each author’s story remain true. I wouldn’t have accepted it had I thought it needed a drastic overhaul, plain and simple. With my own book, I can be my own worst critic. Even now, I keep picking at it, wanting to change things or seeing things I wish I had done differently. I had a harder time letting go… with HoH, they weren’t my stories and I could see them through a clearer lens. For my own stories, I am always finding something I could change, something I could make better and I am much harder on myself than I am on others.

Can you tell us a bit about what you look for as a publisher, for those who may be interested in submitting manuscripts or short stories to you in the future?

For manuscripts, I am looking for something different, something that hasn’t been seen before. I like darker fiction, and I want the reader to feel something when they read the story. I’m not opposed to controversial themes, in fact I like them. I want to see more LGBT characters and more non-traditional heroes (women in traditionally male roles, characters of varying races, women that aren’t conventionally perfect, etc).

Are there any more releases we should look out for in coming year, either through Fey Publishing or your own work?

Oh yes, lots. As far as my books go, I have a novella I plan on finishing up soon called The Devil’s in the Details. I have one book that’s finished called The Caged Girl which is part of a series. I wrote it for NaNo last year and it just needed to be edited. I will be finishing up another book for NaNo that doesn’t have an official name just yet. Hopefully at least three books will be out this next year or so.

For Fey Publishing, the list is longer… I have plans for two more anthologies at least (Happily Never After which includes dystopian fairy tales and Pets Are People Too which is a charitable anthology featuring fictional stories about pets and animals). I will also be releasing several books by other authors… Shattered Honor by Kevin Saito is finished and in the works. I have the third book in the Vampire Relics trilogy from Tracy Angelina Evans to put together. I also have Spellsword by K.L. Mabbs (a fantasy with a lesbian love story) and Paisley Sage and the Hole in the Sky (a YA story with a strong, young female protagonist) from Mallory Evans-Coyn. If all goes well, I have a few other authors I am looking to sign too.

They messed with the wrong girl this time.

From heroes to villains, Femmes du Chaos sets out to show the world what the fairer sex is really made of. You’ll meet women of all ages and from many different walks of life… Warriors and schoolgirls, side-by-side in one place. One thing connects them all, and that is their ambition. Whether they use their ambition for good or evil, well that’s for them to decide. Gritty, fantastical and sometimes uncomfortable to read, Femmes du Chaos is a tour de force that holds nothing back. There will be violence and there will be blood.

For excerpts from Femmes du Chaos, check out the announcement on Kristen’s website. Or you can go ahead and add the book on Goodreads or buy the book on Amazon (Kindle

Kristen Duvall is a writer of tales both real and make believe. Born and raised in the Midwest, she now resides in Southern California with her boyfriend, her Great Dane and her rescued calico kitty. She’s been writing and sharing her work online for several years now, and has decided to take the plunge into publishing her work for the world to read. She dabbles in horror, science fiction, fantasy and speculative fiction. She enjoys both Adult and Young Adult fiction and loves to write strong female characters. You may follow her on Facebook or visit her website.

Current progress on my Daily Bugle Lego set. 5 more sections to go.
Honestly don't even remember how I found out about Kena: Bridge of Spirits but I'm loving the graphics so far, and the Rot are adorable.
How much Lego did I just get?
First Halloween decorations on my street, and we're still a week from October. 👀
It's Morris! So cute.
New figurines. I'm actually not sure where I'll put these yet because my glass figurine cabinets don't have enough room for all of them. But they're pretty sweet additions for my collection just the same.
I feel like I've finally gotten the right consistency and temperature for making pancakes. They just naturally made the right shape as I poured them on the griddle. Amazing!
Also in the "It's close enough to Halloween that you can buy decorations now" files, I picked up this sweet skull with flowers and a crow, and I'm really tempted to just keep it on display all the time. It wouldn't be my first permanent skull on display. I like skulls as part of my decor for some reason. Might be a cross between my interest in the Doug Anthony Allstars and pirates.
I think I'm going to call this my biderous look---bisexual spider that's murderous for trees. 😂